We are currently carrying out updates to our shop.
Please email events@forestrally.co.uk to purchase directly.
We apologise for any inconvenience. 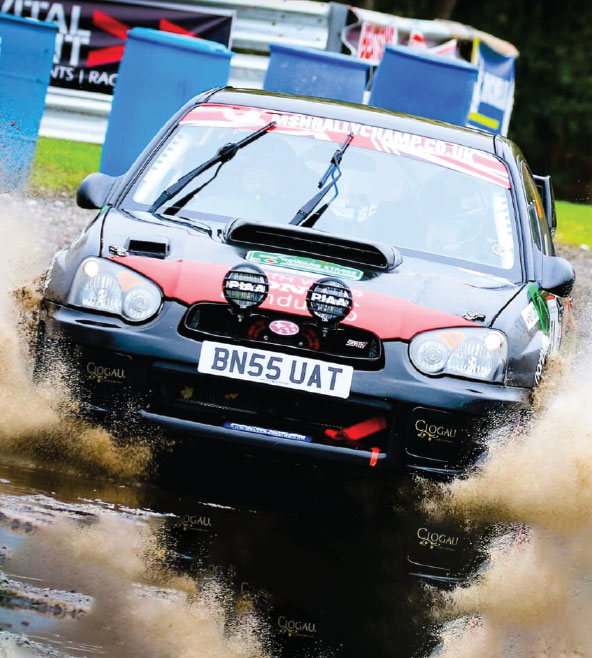 Now owned by Ross Leach (Citreon C2 Rally Champion 2015 and current Welsh National Competitor Subaru Group N B13 Sponsored by Ranne Racing) it was previously owned by the Higgins Family. Both David and Mark Higgins leant their ‘trade’ on these forest stages.

David Higgins: After a successful UK/Europe career in 2011 David joined Subaru Rally Team USA in the Rally America series as a replacement for Travis Pastrana. He won the title at the first attempt with three wins from six events. He also set the new record up Mount Washington in a Subaru Impreza, faster than Pastrana's run up the mountain. He has won the Rally America championship 8 times in 2002, 2003, 2011, 2012, 2013, 2014, 2015, and 2016.

Mark Higgins has won the British Rally Championship three times, 1997, 2005, 2006.[ Mark has also worked for many years with Top Gear's former Stig Ben Collins on various film and television sequences and was a stunt driver for the James Bond films Quantum of Solace and Skyfall. Mark has also completed the fastest ever lap of the Isle of Man in a Subaru Impreza.

As well as being a regular venue for filming by the BBC for various shows including Top Gear The Forest Experience has been frequently used by many motoring stars and enthusiasts alike. World Rally Champions include Ari Vatanen , Pentti Airikkala Colin McRae, Malcolm Wilson and Petter Solberg. Other celebrities and keen motor sports enthusiasts including Gee Atherton, John Newman and Sigala have all visited recently

Top UK based racing teams also use our venue. In 2017 a UK based F3 Team have sent drivers here for car-control skills training and found it as beneficial as trips to Sweden for testing on ice.

Why would you drive around cones in a field when you can drive a genuine rally stage?